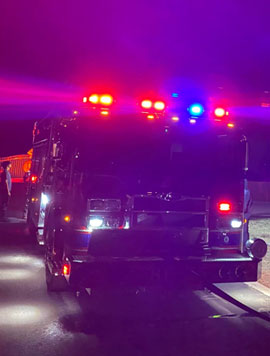 After a long history of local businesses coordinating fundraisers to support local EMS and volunteer fire departments, a group of dedicated citizens looked into creating an Emergency Service District. This district would maintain the funding sources and oversight for future Fire and EMS services for the Mico, Castroville, and LaCoste areas. The proposition was put before the voters on May 1, 1993 in an election and passed. On May 10th, with the signing of a resolution the Medina County Emergency Services District #1 was created. A five-member board was appointed by the County Commissioner’s Court, and the first official meeting was held June 30, 1993.

In 2008 the District performed an internal review of its master planning goals and station needs. The research showed that the District would not be able to sustain its operational needs with just property tax to keep up with the growing operational demands of the District.

In 2015, the District held an election to allow for the collection of sales tax to supplement the district’s revenue. The election passed, and once a steady flow of funding became available, the district has grown every year since. These additional revenues allow the District to move forward with its master plan and implementing new stations to meet the future demands of the District.

2004 - The District added full-time, paid EMS and 2 ambulances with a contract with Medina Valley EMS

13 June 2022 - The District added 6 Career Firefighters to staff during peak hours of 0600-1800 to supplement our dedicated volunteers at Station 10 Castroville and 15 Rio Medina.

8 December 2022- The District added 6 Full-time Career Lieutenants to switch from peak time staff to 24hr a day staffing with two personnel at each station.

To keep pace with the development in the area, MCESD#1 is continuing to implement and adjust its master plan to ensure our citizens are provided with the highest level of Fire & EMS available with the funding provided.